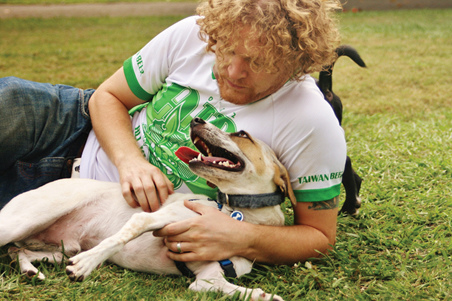 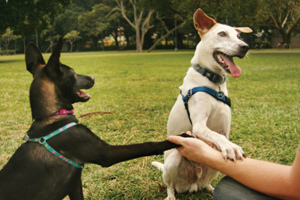 Before my husband and I arrived in Taichung, I received a Skype call from my sister, who had been living in Taiwan for three years. The moment I answered she happily announced, “I’ve found your dog!”

I was in Canada at that time, and didn’t realize I was looking for a dog. She found Peanut that evening hiding under a jacket at a Taichung park in December. He was 8 months old, terrified and abandoned. He refused to move from that spot, trusting that his people would surely come back for him. Even being so young, he was loyal to a fault. I told my sister all the reasonable excuses as to why we didn’t need a dog as soon as we arrive in a new country, and that she should try to find a good home before we move there. But over the months, she didn’t really try, because she knew where Peanut belonged.

About five months later, on the first day of our new life in Taiwan, my husband and I fell in love with Peanut. We never expected how quickly and deeply we would bond with him, and he became our most loyal, goofy and trusted companion. He will never have to worry if we will come back for him, because we are his for life.

Later in October, while walking Peanut and another temporary foster dog, I stumbled upon a small and scraggly black puppy at a temple. She was dirty, skinny and so happy to see me. She was three months old, and also abandoned only a block away from where Peanut was found less than a year earlier. The two Taiwanese grandmas who were watching us intently from the park benches knew exactly what going to happen next. I scooped up the licking and wiggly puppy in my arms, and walked back to my home with three dogs.

My husband and I did not intend to keep Lexi — we thought Peanut plus the occasional foster was enough. However, she quickly and expertly snuggled her way into our hearts. We were in denial, but the first time her body melted out on my husband’s lap and she fell into a deep, blissful sleep, it was all over. Lexi is our ever watchful sleek black shadow. She possesses an awareness and ability to read human behaviour that I have never experienced with a non-human being. She feels emotions so completely and deeply, you can see them plainly in her brown soulful eyes. She completes our rag tag brood.

We became a family of four within the first six months of living in Taiwan, and our lives have become more enriched and meaningful because of our adopted dogs. They teach us everyday what it means to live more compassionately, and with open hearts. They reward us with their unconditional love, loyalty and hilarious antics, and you will never meet happier or more grateful dogs. Every time we walk through the door at the end of the day, they greet us like it is the best day of their lives. 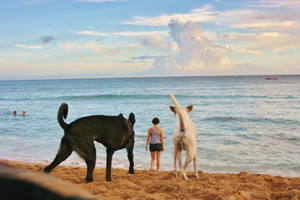 Please consider adopting or fostering a street dog, it is a rewarding experience that will change their world and yours forever. 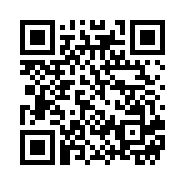