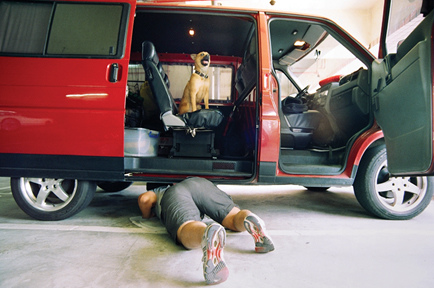 It all began during a typical night-hike into the mountains. At 2:00 am, the hills behind our homes were extra serene and tranquil so my boyfriend and I decided to follow the unlit path. Suddenly, out there in the darkness appeared a pair of glowing eyes which made us fearful and we decided to return home. But those eyes kept following us and it wasn’t until we reached the street lamp when we discovered the eyes belonged to an emaciated puppy.

The puppy was like a starving refugee who didn’t dare to come near us. Recalling the times when I used to feed the street dogs when I was young, I quickly charged to the nearest convenient store to buy a can of dog food and fed the dog on the spot. He devoured the food within seconds so we bought another can. After a closer look under the light, we discovered he was mangy, scraggly brown puppy with a black snout and pointy years. From his childlike face, I can tell he had led a hard life. With no collar and no pack to follow, we suspected this little poor timid dog was abandoned.

The local volunteers always fed the dogs at night because they knew the nearby residents would complain if they saw people feeding these homeless dogs. To protect the dogs from the indignant residents who often blamed the dogs for the city’s filth, the volunteers had no choice but to carry out their work under the moon and the stars.

On that night, a volunteer that I had met before also appeared. This lady worked as a janitor during day but at night she would feed the city’s stray dogs with the left over meat she gets from the butcher. Although she was saying hello to me, her eyes were fixed on the dog. She asked me where the dog came from since she has never seen it before. The lady’s eyes were full of sympathy and quickly, she tossed the dog a chicken drumstick. My goodness, I bet the dog never thought that he would get to enjoy two cans of dog food and a big chicken drumstick all in the same night!

Out of the blue, the lady said to us, “why don’t you two take him? He looks like was discarded. The pack would never accept him. Its fine if you reject him because the manager of the nearby temple eat dogs, but would you at least take him to some place far because he will for sure die if he stays here. He has such an innocent disposition which means he will never survive out here. But you know, winter is approaching and you know what they say, the tastiest dogs are the blacks ones, followed by brown, spotted and white. I am not kidding, people will eat dogs! ”My boyfriend and I looked at each other. We never intended to have a dog because we didn’t have the time or the space. But that night, the volunteer kept asking us to take the brown puppy home. In a swift motion, she put the collar on the dog and handed the leash over to us.

To my surprise, my boyfriend grabbed the leash and said, “We will never abandon him once we take him.” He was quite courageous when he uttered those words.

And this is how the puppy arrived at his new home. In the first few months, he had severe diarrhea to the point he had bloody stools. The vet had no idea what to do so he treated the dog for intestinal issues. After a while, his coat began to shine and now the once timid and unwanted puppy, is the center of attention everywhere he goes. This little dude has never chewed off anything in the house and always waits to relief himself outside the house. He eats everything, including yam, vegetables and even the mango seed buried in the ground. Once he even ate the limes we grew in the backyard. Every trouble he gets into has to do with food. If I raise my voice at him, he would give me a pathetic sad look.

Now, this dog goes everywhere with us, whether it be up in the mountains and down by the beach. We take him to work and on all of our camping trips. At night, he is the guardian of our car and in the morning he hovers over us to beg for food. We often think this latest addition to our family is only pretending to be dumb because we believe, it was him that selected us and not the other way around. Moreover, he has trained us well.

His is our family. His name is Doggy. 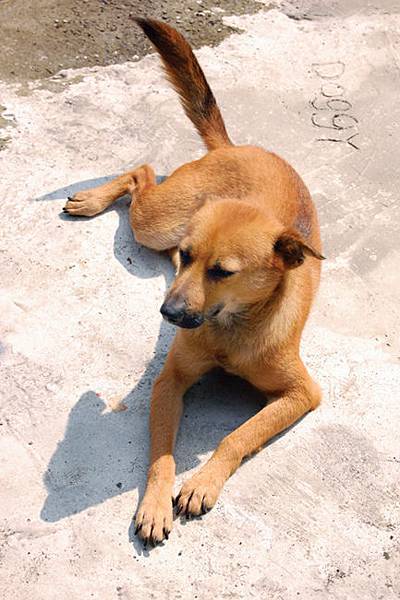 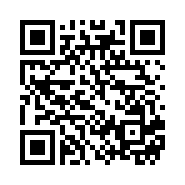