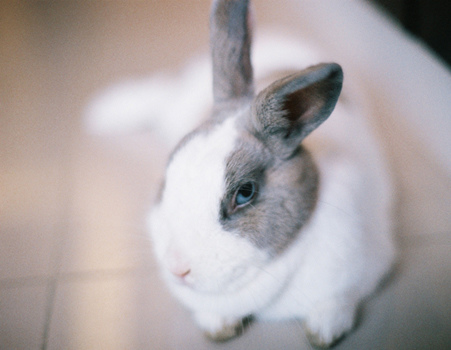 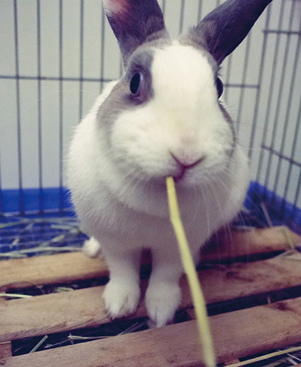 My encounter with rabbit was a sheer coincidence. In 2009, a friend asked me babysit her bunny for 40 days while she traveled abroad. The rabbit and I ended up spending the entire summer vacation together. After he went home, as I was looking at the space where his cage used to occupy, I suddenly felt a surge of sadness. A few months later, my friend A said she rescued a rabbit that was badly abused and asked if I could adopt it. My friend A reassured me that the rabbit was very cute and cuddly. Without giving it much thoughts, I picked up the rabbit from my friend. The vet said the because the rabbit was immersed in water for a prolonged period of time, his wound was ulcerated. The vet put him on a medication regime and ordered that he be brushed every day. Just like that, I brought him back to Taipei from Hsinchu and began my life with rabbit.

Nothing is ever easy at the beginning. The rabbit and I started our lives together in constant struggles because he did not like to be forced fed his medication. Without any trust between us, it was not an easy feat to forcefully inject the medication into his mouth. He scratched me on a daily basis and our days were spent sparring against each other. I thought about what A said about him as a loving cuddly rate. At that time, my experience with him was complete opposite of what she promised. But I figured since I already agreed to adopt the bunny, I will just have to live with it even it means to live with a ferocious beast.

After a while I began to understand how awful it must feel to be forced fed medication by a stranger. I still have the scratch marks on my hands to prove how big of a struggle it was. At that time, the rabbit hated me. Each time I got close, he would stare me down with his big eyes as if he was looking at his worst enemy. His ears would perk straight up because he was on constant high alert. He was tense even when he slept. I could only imagine how hard his life must have been before he met me1. When the rabbit was finally able to roam freely around the house, I put an Elizabethan collar on him to prevent him from biting me.

But after a while I decided putting an Elizabethan collar on him was a bit cruel because limiting his vision meant he was always bumping into walls. So instead I decided to train him through a series of games. Rabbits are nocturnal animals and their instinct is to burrow themselves in the ground. Because rabbits love to explore dark holes, I prepared a long tunnel for him made out of cardboard with grass inside so he can feel at ease. Everyday I would brush his fur to cultivate a relationship of trust and so he knows I come in peace.

I named the rabbit Pocky because the his light brown patch is the same color as the chocolate cookie sticks that I love. Rabbits are actually very smart with an intelligence level of a three-year-old. They fully comprehend what you are saying. For example, when I want him to drink water, all I have to do was to point at the water bottle and he would drink from it. He also understands when I tell him to eat grass. We also began to play a game in which I would give him a treat whenever he followed the “come here” command. At first he didn’t care for the game, through the usage of treats and fruits, he established a positive association with his name. Slowly, our relationship improved.

It is quite fun to observe Pocky. He often rubs his chin on various things. Later I found out this was his way of marking his territory. When he is happy, he hops really high and twists his body in mid-air. It took a long time Pocky to let his guards down. By early 2013, he trusted me so much that he let me cradle him in my arms like a baby. For rabbits, the belly is the most sensitive part. It is even harder for an abused rabbit to allow its belly to be rubbed.

Adopting Pocky gave me another chance to get to know this species. Although I had four rabbits in the past, I didn’t really understand the characteristics of rabbit until Pocky. It is a gross misunderstanding that all rabbits like carrots. If they had the choice, they much prefer to gnaw on grass and fruit, with carrots as their last choice. The way they express their discontent is always very expressive and direct — screaming and stomping their hind legs. Right now, we have established a communication system by using different looks. When he fixes his eyes on me, it means he wants to be cuddled. Sometime when I call him over, he pretends to be shy and would scratch on the floor before he comes to me. When I cradle him, he would lick my hand to say thank you and a gentle bite means he wants to be let go.

Some say rabbits are silent animals but to me, rabbits are very loud. Rabbits would do anything to express whatever emotion they are experiencing. My friend A’s description of Pocky was right after all. Now I can finally feel the sweet joy that he brings to my life. 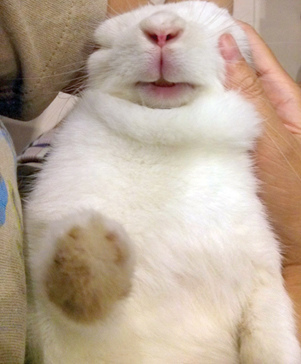 Before his adoption, Pocky was kept in a small cage within a bigger cage. He had no shelter to protect him from the sunlight or the rain, which means the cage would get flooded during a rainstorm. The doctor said because he was immersed in the water for a prolonged period of time, his genital has become ulcerous. The fur on his rear end and on his paws was completely mangy because he was so neglected. I don’t think he will ever fully trust human again, but he was friendly with A because she fed him regularly.

Promote Your Page Too 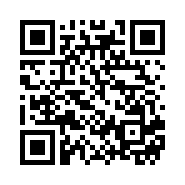