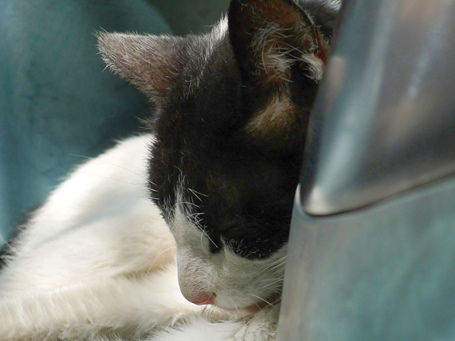 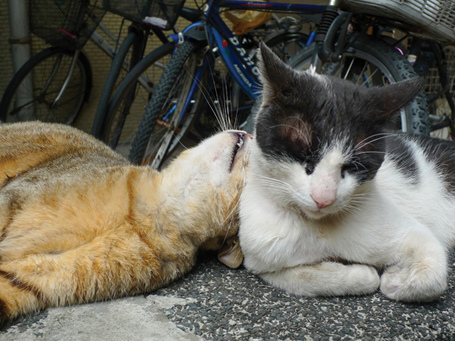 Feral cats are often a mystery. Although the scars on their bodies are clues to their past, the conclusions are often merely conjectures.

What was Big Cow like before? Where did he grow up and what was he like as a kitten? Have I met his siblings and parents? Regardless of his past, Big Cow was a regular at the area where I feed the stray cats. I’d like to think it was because he was enamored with the tabby who we fondly hail as the Queen, but I know, it is most likely because he enjoyed the food I provided.

I knew he didn’t want to leave the streets because he snuck back from his foster homes several times.  He adored the Queen so much that even when she used him as punch bag, he still meekly followed her everywhere she went. It may appeared Big Cow led a charmed life — regular meals, affectionate belly rubs from humans, midnight strolls under the stars, falling asleep to the gentle breeze while being surrounded by beautiful companions — but the truth is, all that is only a small fraction of what life is really like for street cats.

Two years ago, Big Cow contracted feline immunodeficiency virus (FIV), commonly known as feline AIDS. This year, he was diagnosed with chronic renal failures. His conditions gave me no choice but to bring him home. Since then, he has suffered from many complications, including fever, infections, bloody urine and severe fatigue. While he fights against death, I rushed him from one vet to another, doing everything imaginable to revive his health. I give him injections, force feed him medicine, installed a feeding tube on him, and even massage him regularly. Each morning, I rush to his side to make sure he is still breathing. Whenever something goes wrong, I would be in such frenzy and I would began to question whether treating him was a mistake. What did Big Cow really want? As he battles against his ailments, I struggle with doubts and anxiety, and mostly fear that his life would end under my watch.

Although I still have no idea what “doing my best” entails, I choose not to give up. Little by little, I began to learn that in order to take good care of him, I must remain calm and collected. I keep telling Big Cow, “you do your best and I will do mine, let’s do this together!” That thought is the sedative I need to stay composed. I believe all things happen for a reason and that our job is to do our best and a Higher Power will take care of the rest.

Gradually, I developed a systematic way of nursing him a home. If I had trouble giving him injection, I would give myself a break and try again later. When he couldn’t keep his medicine down or when he refuses eat, I would think of a creative way to help him such as grinding up his food into smaller pieces. I discovered that even I can provide hospice care home.

Since he fell ill, I have celebrated birthdays by myself and wiped away my own tears. I have never felt so isolated, yet it was also the first time I truly experienced the miraculous healing power of life. The kindness shown by vets and strangers warmed my heart. My views on money took at 180 degree turn. Most of all, I decided to quit my teaching job and start a brand new way of living. Although life is still full of uncertainties, at least now I know what I can and cannot change.

I believe my time with Big Cow has been a training course for my heart so I can be stronger and more tolerant to embrace whatever life throws at me. I have learned when to be insistent and when to let go. It may look like I am taking care of him, but in fact, it is Big Cow who is helping me to hold on to my beliefs.

From him, I learn that happiness comes in the simplest things — the ability to eat, drink, breath, and sleep.

Some say cats are philosophers, but to me, they are masters of living. They help us see it means to be alive. One time, when Big Cow was at a height of misery, I made a pact with him that as long as we stay on this path, in no time (even perhaps before autumn comes again), he will be snoozing away comfortably in my studio with his belly curled up like a shrimp. 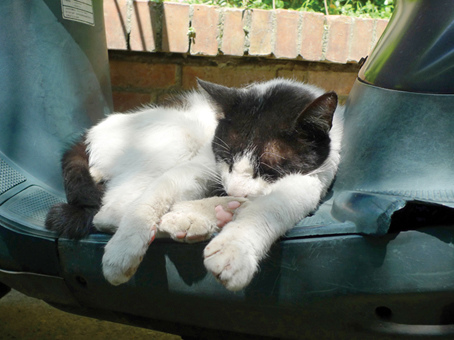 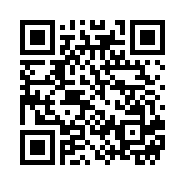